«The AD FINEM boys are something more than friends. They are family». Exclusive interview with a founder and co-owner of «The Greek Gods»

It has been few days since the conclusion of the main Dota 2 tournament of this half of the season. Although there could be arguing about the MVP of the tournament, what game was the most spectacular and what team disappointed us most, but one thing is clear – Ad Finem is the team that surprised us the most!

I’ve managed to talk to Marios Papasarantos, a Dj from Nafplio, a huge eSport fan and a founder and co-owner of Ad Finem. 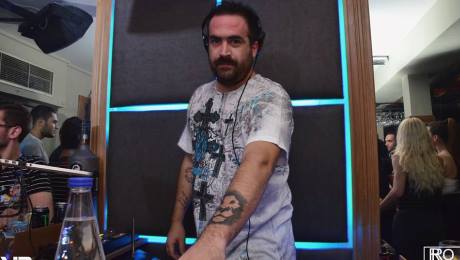 – First of all congratulations with your huge success.

– Thanks a lot, finally hard work pays off.

– As far as I know you are the co-owner of AF, is that correct?

– Who came up with the idea of creating this eSport club?

– It was my idea and i have been working on it for the last 2 years. The first project in the end of 2014 it was to create a Dota 2 academy in Greece, to pick up a LoL team, and 4 friends as a hearthstone players. Finally In the end of the September 2015 I was talking to a big football team in Greece to support this project and they don’t have any idea of eSports. So i kept working alone and finally I found 2 investors from Greece and they fully supported this project.

– So basically you are the father of AF?

– How difficult it is to run an eSport club? From what I heard it’s a not very profitable business.

– In Greece it’s crisis, and it’s very hard to run a project like this. After summer of 2015 when capital controls take action in Greece this dream starts looking scary so we moved to Cyprus as a company and we work this project from our houses in Greece. If you dont success with any of your team in eSports and you dont have big numbers in social media and «superstar» players of course it is not profitable business to run. We started this project totally from zero.

– But right now you have won 500k dollars, that’s a lot of money. How much of this will go to players and how much will organization take? Like 10% maybe?)

– I cant answer correctly this but almost 100% goes to the players.

- Ok I got it. So you had a great success. Are you planning to capitalize on it? Like finding new sponsors or merchandise somehow?

– Now we are in discussions with a lot of potential new sponsors. All of these months the most of the companies who were interested in sponsoring teams in esports, they were not interested to support a new Greek team in Dota 2 only and few players in Hearthstone. After one year and very hard work we have a healthy eSport organization and successful Dota 2 team. The merchandise plan also is on the way. We are up for discussion with anyone who is interested to make our lion HUGE ! Because It’s time to expand deep into eSports with CS:GO-LoL-OW teams soon.

– Thats great to hear. Ok enough about business. Let’s talk about the Boys. What was your team’s mindset going up against Newbee?

– Since we have qualified for The Boston Major the mindset and the plan is one for the boys. We are going to Boston to go as far as we can. We are here to prove to everyone that we are not afraid of any team in Dota 2 scene in the world, they have to be afraid of us. So even with Newbee or in our group stage we study every single team and we are ready to win them.

– And you totally did! So how do the boys feel about single elimination bracket?

–The single elimination thing has confused us when we heard about that, but this is making us more decisive and ‘hungry’ to prove what we can do.

– That’s interesting. Did your win against a big Chinese team in 1st round of playoff boost your team’s morale?

– Every time when you face a Chinese team in this kind of tournament, you face a Dota 2 giant. All of these teams and players are very strong and every time they can comeback from any situation in game and they have proven it all for all these years. So yes, when you win a TI champion, or you win LaNm or the living legend xiao8, of course this gives you a lot of power to continue with your morale high.

– Your team has played exceptionally well. Interesting to hear about team chemistry: are they like a team of friends? Do they play with each other because they want to or because they need to?

– The AD FINEM boys is something more than friends, they are family. If you remember last year a lot of Dota 2 teams disbands or change they rosters. Our boys stayed together and believed in each other. These boys are hungry for success. They don’t want to be ‘Dota Superstars’. They want to win, they are fighters and this is very important. I don’t know if any team in Dota 2 scene has chemistry like ours. You can’t imagine in our communication (team call) after every single victory or even lose they stay together, watching replays, find and try to understand they ingame mistakes and ingame calls mistakes. And this is a big step to improve your team

– I can only imagine. By the way this AWOO AWOO thing…

–…does it have something to do with the movie 300?

– This comes from the movie 300. In Boston Major everyone calls the boys’The Greek Spartans’ etc ..so the similar thing if you watched the movie, every time when Leonidas calls Spartans they answer AWOO AWOO AWOO (3 times). So the boys see that people love the identification between the spartans and AD FINEM and they make this for the crowd ! Now this will be a chant in the crowds of the next tournaments around the world FOR SURE!

–The more we talk the more I love your team.

– If you come in Greece to meet them you will love them for sure!

– Can you tell me more about him? What kind of a man he is?

– George is the guy that everyone loves to have as a friend. He’s all the time smiling and making jokes with his friends, and laughing loud. As a person he’s something very special. As a team captain he is respectable, after 10 years in Dota he knows exactly what he wants to do and what he wants from the team. They prove it with his past team and with the Lions as well. What you see inside the booth after every victory. This happening in his desk in home or in our gaming house. You can’t imagine the energy of this guy.

– Where is he from? What’s his family?

– He is from Sparta! He lives there with his family, he has a brother and he loves training. When the weather is good (or not) a lot of the times after the practice with the team he goes alone in the Sparta’s Stadium and do gymnastics. Imagine that he goes to stadium 2-3-4 o’clock in the night before our first major qualifiers.

SsaSpartan used to work at Internet Cafe in Sparta, he is training there and all the official games he’s playing from there with LC-NLG and with AD FINEM in the beginning. Before WePlay lan event he stopped working there to focus only on improving the team.

– So he had a full time job while being a competitive player?

– Yes, in the CUBE Internet cafe in Sparta.

– How did his family react when he told them that he was going to play computer game for living?

– Here it’s the perfect situation for Spartan and for all the team. All the families of our boys in the team fully support what their kids want to do. Thug left college and football career, Madara left college, Skylark left college as well. Only MNT still studies psychology

– Can you tell me any cool story or interesting quote from Spartan? This guy is so emotional, I bet there is something to tell.

– INGAME : He saw the victory from his draft, once he already pick 4 heroes, and he checks what he needs more in the draft and he says «i’ll pick invoker (or any hero) and we win this!

Also he wants to play and speak greek (his english is perfect) but he feels more comfort to speak greek in Dota.

That’s why he took madara from NLG and we created the Ad Finem. Imagine that he already qualified for the Gameshow lan, and then I make calls to Apostolos (MNT) and Haris (Skylark) to inform them that Spartan want to make a team with you +thug and madara

Even he wins this lan, the greek dream already starts building behind.

– So this guy is very committed! Did he always know that he will become a pro or at certain point maybe he considered like regular job?

– He knows exactly what he wants. He wants success! He’s a hard worker and if the dota 2 won’t work for him he plans to work on something else. Now he is hungry to be the Dota 2 world champion and ready to hunt the Aegis!

– What are your plans for the upcoming weeks?

– Now we have to start working with the new patch of course. Few days of rest and back in Dota 2 action. The boys have travelled a lot in the last weeks and of course they need some rest.

– Yes! Also we are ready to expand as Organization in the rest of the popular games in eSports

– For me as a Dota veteran player since the beginning it is the best thing in Dota 2 ever.This is going to change a lot of things in the future. The boys, well I think they have studied the 7.00 yet because this time they are flying back home (in 6 hours they are going to land in Athens).

– Got it. So is there a tiny little chance that I can have this kind of a conversation with any of your players?

– Of course but not next week. I have to let them rest before comeback in action.

– I’m so grateful! Thanks a lot and best of luck to you and your boys.

– Thank you Konstantin, i wish the best for you in the future. Have a nice day.

All scores, stats, major news, interviews and memes – in a single app! Download for iOS and Android.